It is hard to believe I did this project back in early November.  Stampin' Mama    had posted that she was participating in Operation Baking Gals and was looking to start a group of stampers to send not only cookies but homemade cards as well..  So, what is Operation Baking Gals?

I checked out the site and contacted Stampin' Mama right away.  I joined her team – Team Cookies and Cards.  We had to send out our packages the week of November 10th.  I made up a bunch of Christmas cards for my package and baked up some Chocolate Chip Cookies.  I also purchased a few packs of gum and come chocolate!  The above pictures are of the box filled with all the goodies ready to go and there is one picture of the assortment of cards I made.

The boxes from our group were all sent to the same Soldier and he was going to distribute all the goodies.

Erika was contacted by a mom of a Soldier almost immediately after she posted she wanted to find someone to send our boxes to.  Nicky email Erika the following: 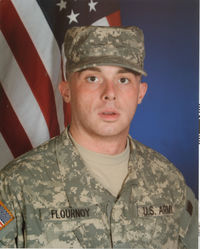 Here's what Nicky shared with Erika:~

My son, Wayne, just turned 23 on October 17th.  He joined the Army in July of 2007 completed his basic training at Ft. Jackson.

Wayne
left for Ft. Belvoir to begin his AIT training for a 21L, which is a
Geospatial Analyst.  Basically, what that entails is creating
customized map products for Route Clearance, Infantry and other "ground
pounders".  They show them where past threats have been, potentials and
other information, such as, a general overview of their Area of
Operation or a route study.

Wayne
arrived in Kuwait on September 5th to begin training before getting to
Iraq on September 11th.  He has finally made it to the 5th Engineer
Battalion the first part of October.

Wayne is also recently married to Megan and will be expecting a child in April.

Thank you Erika for organizing our group and finding a Soldier to send all the packages to.

I would like to wish Wayne, Megan and their families a Merry Christmas and a Happy and Healthy New Year.  May God Bless you for all you have given.

I am here to show you how to make the most of your CREATIVE DOWNTIME.
Have a question? Don't hesitate to contact me. I am here to help you. Read More…

The Five Fundamentals of Stamping!

Just fill out the form below:

You have Successfully Subscribed!

The content of this site is the sole responsibility and opinions of Annette Stewart as an Independent Stampin’ Up! Demonstrator and the use of its content, classes, services, and/or products offered is not endorsed by Stampin’ Up! Stamped images are copyright Stampin’ Up!